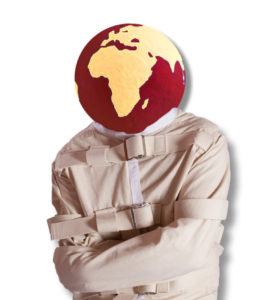 Wellness and mental health, dealing with depression and anxiety, are hard enough in normal times. These are not normal times, however. The kind of social and political divisions we are seeing are dividing families, fracturing communities, breaking friendships – and even putting a strain on international relations.

Tensions are high at every level. In close personal relationships, those tensions lead to greater anxiety and greater stress. This is especially true for families and relationships outside the world of affluent whites. Writing from the perspective of the United States, new immigration policies are causing enormous anxiety in immigrant families. We are literally seeing it on the news: children torn from their parents, parents torn from their children, families broken apart and some deported while others stay.

Even for those of us that are not living that nightmare, the stress is high.

Political divisions around the world are having a profound impact on mental health. Partially spurred on by Vladimir Putin’s information warfare tactics and espionage, conservative nationalism is on the rise everywhere. This kind of political landscape naturally gives rise to racism, as communities divide along ethnic lines. The power of this kind of polarized thinking runs very deep. Our ancient ancestors lived in tribal communities, and even as they became more civilized there were always wars and conflicts. Tribalism lives on as racism and anti-immigration movements.

“Othering” can be an insidious trap to fall into. Nationalist manipulators use subtle language to drive a wedge between races and ethnicities. Instantaneous electronic media picks up on othering messages, and before readers and viewers even know what has happened they find themselves thinking of certain groups as enemies. The more politically polarized a nation becomes, the more deeply this kind of trend is instilled.

In the United States, new legislation and government policies are having devastating economic consequences for many millions of people. At the time of this writing, healthcare from millions of children is being eliminated. A new tax bill promising prosperity for everyone is in fact a massive giveaway to the richest few.

Economic inequality has grown dramatically worse in recent decades. The rich get richer, the middle class is disappearing, and more and more people struggle to make ends meet. Home ownership is no longer a reality for an increasing segment of the population. Manufacturing jobs continue to leave the United States, as corporations seek greater profits from overseas labor and relaxed environmental standards.

While working-class people are struggling, they are watching as billionaires and corrupt politicians trade favors in limousines and country clubs. The American dream is slipping away for many, as more and more of the nation’s wealth accumulates at the very top of the socioeconomic spectrum.

For working people who struggle with mental health issues, anxiety and depression can get worse in conditions like these. It’s easy to feel helpless. The rich and the powerful keep getting more rich and more powerful, and there doesn’t seem to be anything we can do about it. And so depression becomes deeper, anxiety becomes more pronounced. It can feel like an endless cycle.

We cannot change the world around us; or at least, we don’t think we can.

But we can change the world. We just can’t do it by ourselves.

Depression, anxiety, bipolar disorder and other mental health conditions can cause us to isolate. There’s a tendency to think that we’re alone, that we have to do it ourselves. That’s the trap that binds us to inaction, that binds us to succumbing to fear.

We can change the world in community. No – we can’t do it ourselves, but in bonding with others who also want to bring about change, we combine our strengths. We contribute to something larger than ourselves. We work together with other passionate people to achieve what we could never do ourselves. And there’s power in those actions. There’s power in community.

Mental wellness can be an elusive and tricky thing to hold on to. But a holistic approach to living helps us find balance when we feel unsteady. Giving of ourselves – contributing, working to make life better for others – that can restore balance. It can build esteem, and give our lives a sense of purpose. In our struggles with mental health, being a part of something big and important can make an enormous difference.

And in our close communities, our families, our workplaces and churches and social groups, open dialogue can go a long way toward relieving depression and anxiety. Holding is burdens inside lets them grow – letting them out in loving community dissipates them. Talk about it. It can really help.

The world has gone mad – crazy, loony mad. When we work to restore sanity to the world – it can’t help but be beneficial to our own mental health.